When having created a conceptual model in the storm drain coverage, select the Map→1D Schematic menu item from the Storm Drain menu to generate a hydraulic schematic from the coverage. After having done this, define model specific data on the hydraulic schematic in the river module.

In other words, here are the steps to take to define a simple urban hydraulic model:

The Storm Drain model can be added to a paid edition of WMS. 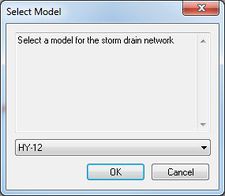 The Storm Drain menu is available in the map module when a Storm Drain coverage type is selected as the active coverage. This menu contains the Map→1D Schematic menu command. The menu is shown below:

WMS has options to import storm drain attributes from either a set of point and node shapefiles or from a LandXML files. Shapefiles are commonly used GIS vector data files. Government agencies often store storm drain network information in a GIS database and exporting these databases to point and arc shapefiles allows importing the data in these databases into WMS. A LandXML file is a commonly used file format that can be exported from all the major CAD software applications. One feature of LandXML files is the ability to store storm drain, sanitary sewer, or culinary water distribution network information. WMS imports this information directly from LandXML files.

When importing a LandXML file, WMS automatically generates a hydraulic schematic and transfers the information in the LandXML file to the SWMM model inputs. When importing point and arc shapefile data, convert the shapefiles to feature objects in a storm drain coverage, map any attributes that need to be mapped, and make sure the storm drain network is topologically correct. When using a shapefile, select the Map to 1D Schematic command after making sure the storm drain network is properly defined in a storm drain coverage in the map module.

NOTE: The FHWA Storm Drain coverage and model has been deprecated in versions of WMS after 9.1. 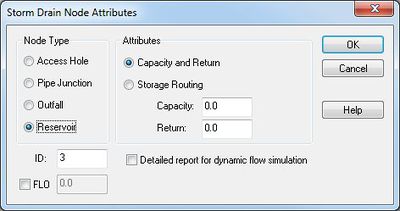 When running an FHWA Storm Drain simulation (by invoking the Run Simulation of the Storm Drain-FHWA menu), an input file is saved and the storm drain program started using the defined input file. An output file name is also required and all of the output generated by the hydraulic analysis is saved to this file.

Plots of results can be created by reading the output file generated using the Read Solution command and then setting up an FHWA Storm Drain plot using the Plot Wizard.

Read Solution
After running the FHWA storm drain model and creating a solution file, plots of results can be created by reading the output file using the Read Solution command and then setting up an FHWA Storm Drain plot using the Plot Wizard.