Global parameters for a storm drain analysis are defined in the Job Control dialog. 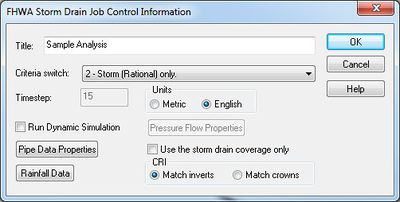 The title is placed at the top of the input file to identify the model run.

Two different kinds of storm drain analysis can be performed. Option 2 is Storm only and uses the rational method (peak flow analysis) to generate the flows for the pipe network. Contributing areas, runoff coefficients, and times of concentration must be define for each storm inlet point. An intensity, duration, frequency curve must also be defined for the modeling area.

The second option is also Storm only (at this point sanitary is not an option) but uses hydrographs to define the inflow rather than the rational method analysis. In this case hydrographs can be computed from any of the models supported by WMS (i.e. HEC-1, rational, TR-55, etc.) and then mapped to the storm drain inlets.

When running a hydrographic analysis a time step should be entered to indicate the timing for each step of the analysis.

Storm drain can be run using either Metric or English units. Parameters entered should be consistent with the units specified.

Turn this option on to see a printout of the hydraulic grade line in the output file.

When running a pressure flow simulation the following properties must also be defined (see help strings for each edit field when defining for more information). 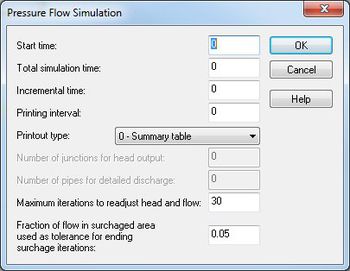 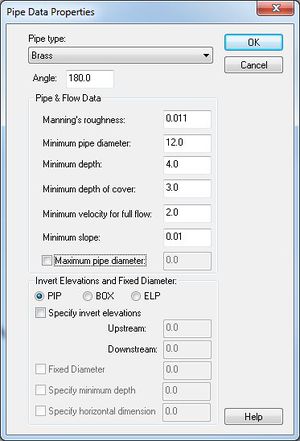 When running a rational simulation an intensity duration frequency curve must be defined for the entire area (only a single curve can be used). The Rainfall Data button allows entering manually the values defining a curve, or use the WMS IDF Curve generation dialog to set up an IDF curve for different areas of the United Stated.

Use the storm drain coverage only