After running a 1D Hydraulic model like HEC-RAS, the result is a water surface elevation (or hydrograph for a dynamic solution) at the cross-section as indicated by the red circles in the river section shown in the figure below. 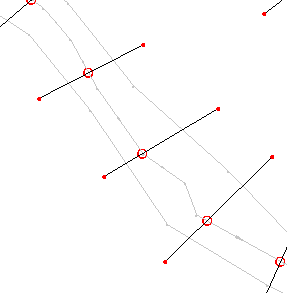 The floodplain delineation uses interpolation from the scatter set created by the hydraulic model solution, but the interpolation is not very accurate with such a sparse dataset (it often takes 6-8 points to interpolate and with such a sparse dataset these six or eight points could cover a long distance within the reach and result in a poor interpolation value). The Interpolate Water Surface Elevations command of the River Tools menu will interpolate, for either the 1D-Hydraulic Centerline or 1D-Hydraulic Cross sections coverages, new scatter points either at the vertices of the feature arcs (centerline or cross sections) or at a specified distance along the arcs. 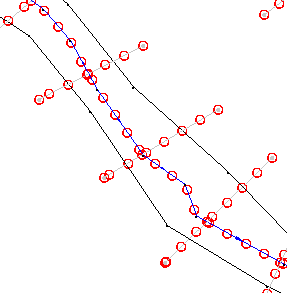