The TR-20 Job Control parameters include all of the data necessary to run a TR-20 analysis that are not a part of a basin, reach, or reservoir. The following are the specific parameters defined as part of job control:

Enter a name and/or project description identifying the model. Two different title records up to 72 characters each can be entered. The title records will appear at the top of the TR20 input file.

The computational time increment defines the length in time between hydrograph ordinates. The interval should be specified in hours.

The starting time of the simulation is defined in this entry. The time should be specified as floating point number of hours past midnight. For example 7:45 am would be entered as 7.75 and 1:20 p.m. as 13.33. 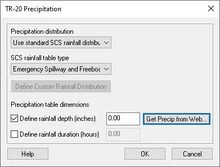 Example of the TR-20 Precipitation dialog. Base flow can be entered in TR-20 from the Job Control dialog by selecting the Define Base Flow button. There are two ways for defining base flow in TR-20. One way is to define a constant base flow. The second way is to define a triangular base flow in the watershed by specifying a volume in inches, a peak time in hours, and a base time in hours. By selecting the appropriate option, define either a triangular or a constant base flow for the watershed. Example of the TR-20 Base Flow dialog.