The General Head Boundary (GHB) conceptually is a fixed head far from the model where it is assume as a fixed head with time (i.e. river, head will not be affected by the model stresses with time). The purpose of using this boundary condition is to avoid unnecessarily extending the model domain outward to meet the element influencing the head in the model. As a result, the general head condition is usually assigned along the outside edged of the model domain. 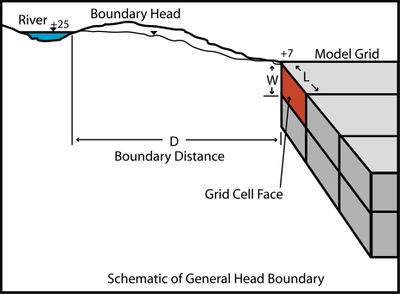 The conductance for the arc = 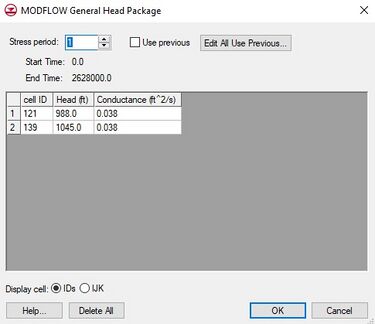 The General Head package is similar to the Drain (DRN) and River (RIV) packages in that flow in or out of a cell is proportional to a difference in head. General head cells are often used to simulate lakes. General head conditions are specified by assigning a head and a conductance to a selected set of cells. If the water table elevation rises above the specified head, water flows out of the aquifer. If the water table elevation falls below the specified head, water flows into the aquifer. In both cases, the flow rate is proportional to the head difference and the constant of proportionality is the conductance.

A set of selected cells can be specified as general head cells using the Point Sources/Sinks command in MODFLOW menu or general heads can be assigned using the conceptual model in the Map module. When the general head attribute is assigned to a polygons, the head and conductance are applied uniformly over the entire polygon. When assigned to an arc, the conductance is applied uniformly over the arc, but separate head values are applied to each of the nodes on the ends of the arc and the head is assumed to vary linearly between the nodes. When the attribute is assigned to a point, the head and conductance values are assigned directly to the cell containing the point. Once a set of cells have been specified, the General Head Package dialog can be used to view and edit the values assigned to the cells.

Edit All Use Previous

This button brings up a spreadsheet allowing the user to quickly edit the Use Previous flag for all stress periods.

The radio group at the bottom of the dialog allows the user to adjuster whether the cell ID or the cell i, j, k values are displayed for the cells containing the boundary condition/source/sink.