The Ghost Node Correction (GNC) package is an optional package included in MODFLOW-USG. It can be used to correct errors in the model that are created “when a line between two connected nodes does not bisect the shared face at a right angle”.[1]

MODFLOW" item in the Project Explorer. 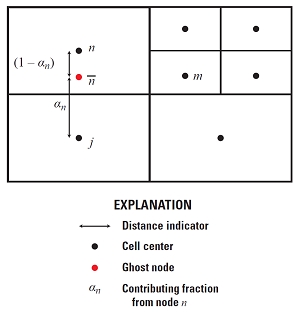 Enter the ghost node data by hand, or allow GMS to compute the data by clicking the Generate Ghost Node Data button. Clicking the button causes GMS to overwrite whatever is in the GncNodes table with the ghost node data calculated using an algorithm which calculates the locations of ghost nodes and computes the AlphaJ values based on the distances from ghost nodes to adjacent cells. Ghost node locations are calculated using the perpendicular bisector of the face between adjacent cells and its intersection with the lines connecting cell centers as illustrated in the figure below. The algorithm considers only the horizontal relationship of cells when locating ghost nodes. Thus, if the figure above is considered to be in plan view, the ghost node will be located as shown, but if it is considered to be in a front or side view with a subdivided layer on the right, no ghost node will be created.

GMS does not currently support some GNC package options, including: