Starting at GMS version 10.0, GMS supports MODFLOW-USG. MODFLOW-USG is a version of MODFLOW based on finite volume calculations, thus allowing for many different types of grid cells. This allows the model grid to more accurately match the model domain and be more efficiently refined in areas where more accuracy is desired.

MODFLOW-USG models are built using unstructured grids, or UGrids, which are a new (as of GMS 10.0) type of geometric object that can handle the wide variety of cell types supported by MODFLOW-USG.

The MODFLOW-USG model is included with all paid editions of GMS.

Only MODFLOW-USG is supported when using unstructured grids. MODLFOW-USG can also be used for a model using a 3D grid. Choosing to use MODFLOW-USG is done in the MODFLOW Global/Basic Package dialog. With a 3D grid at any time the user can switch from one MODFLOW version to another. 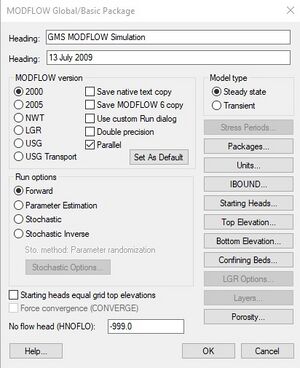 Previous to GMS 10.1 there was no support for the following MODFLOW-USG features, though the CLN and GNC packages and the import feature are now supported in current versions of GMS.

Here are tables of some of the available input and output files for MODFLOW-USG.

When using MODFLOW-USG to re-wet cells: