The Layer-Property Flow (LPF) package is an alternative to the BCF and HUF packages and is similar to the "true layer" option used with the BCF package in version 3.1. With MODFLOW 2000, the layer elevations (top and bottom) are defined as input to the Global Process (using the Global Options dialog), regardless of which flow package is being used. With the LPF package, define the horizontal (Kh or HK) and vertical hydraulic conductivity (Kv or VK) for each layer. MODFLOW then computes the cell by cell conductances using the K values and the layer geometry.

Other noteworthy features include the ability to enter horizontal anisotropy values on a cell by cell basis. There is also an option to specify vertical anisotropy factors rather than vertical hydraulic conductivity values. This option is particularly useful when performing automated parameter estimation since it ties the Kv to Kh and eliminates the need to define Kv as an independent parameter.

Another feature of the LPF package relative to the BCF package is that there are now only two layer types: confined and convertible. A convertible layer is similar to the LAYCON = 2 and LAYCON = 3 types in the BCF package. The layer can be either confined or unconfined depending on the elevation of the computed water table.

Once the LPF package has been chosen using the packages dialog, the LPF package dialog can be accessed through the LPF – Layer Property Flow... command in the MODFLOW menu.

This field displays the current layer. Selecting any of the input array buttons will display the corresponding layer initially. For multiple layer models, this field can be incremented or decremented to show other layers.

This radio group selects the layer type for the current layer. By default, all layers are convertible (where the layer can be either confined or unconfined depending on the elevation of the computed water table). Here layer type can be changed to confined. Only one layer type can be assigned to each grid layer.

The method used for computing interblock transmissivity is specified using the pull-down list in the middle right portion of the LPF Package dialog.

If re-wetting of cells (when cells that went dry during the simulation later have head) is allowed, a wetting factor, wetting iteration interval, and wetting equation must be specified.

Clicking on the More LPF Options button brings up the LPF Package Options dialog where it is possible to remove vertical leakance correction or set a head value for dry cells. 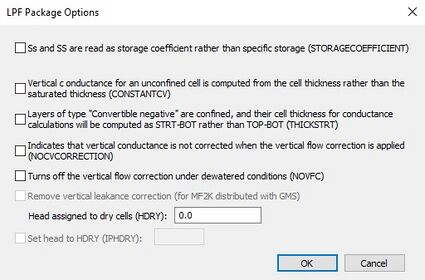 This is the value that MODFLOW will give to cells with a head level below the bottom elevation of the cell (dry cell). When reading in a solution, GMS will mark cells with this value with a dry cell symbol. The Layer Property Flow Package of MODFLOW-2000 was modified by A.W. Harbaugh (U.S. Geological Survey, written commun., 2002) to remove the vertical leakage correction for conditions in which a partially saturated cell is immediately below a fully or partially saturated cell (Harbaugh and others, 2000, p. 31-33). The vertical leakage correction simulates perched conditions within an aquifer system. However, perched conditions are not known to be widespread on a basin scale. The vertical leakage correction adds an additional nonlinear term to the model (A.W. Harbaugh, U.S. Geological Survey, written commun., 2002), which resulted in several of the numerical solvers (SIP (strongly implicit procedures), SOR (slice-successive overrelaxation), and PCG (Hill, 1990; Harbaugh and others, 2000) not coming to a solution and the LMG (link-algebraic multigrid; Mehl and Hill,2001) solver providing unacceptable volumetric budget errors (wrir02-4200.pdf) . Thus in the LPF package there is the option to turn off the vertical leakance correction to account for these factors. After turning on the Remove Vertical Leakance Correction toggle, GMS then uses the NOCVCORRCTION option that is found in MODFLOW2005 to remove vertical leakance corrections.

This is the value that MODFLOW will give to cells with a head level below the bottom elevation of the cell (dry cell). When reading in a solution, GMS will mark cells with this value with a dry cell symbol.