A digital elevation model (DEM, as defined in WMS) is simply a two-dimensional array of elevation points with a constant x and y spacing. While a DEM results in data redundancy for surface definition, its simple data structure and wide-spread availability have made them a popular source for digital terrain modeling and watershed characterization. Several researchers, including Puecker and Douglas (1975) and Garbrecht and Martz (1995) have developed methods to extract watershed geomorphology from DEMs. WMS includes many of these same tools.

The most common forms of DEM elevations are the USGS digital maps. DEMs can be downloaded free of charge from the USGS: The National Map site. Other sources of elevation data may include federal, state, and local government agencies, universities, or private data publishers. WMS can read digital elevation in standard USGS (the older single file format or the new SDTS formatted files), ARC/INFO®/ArcView® ASCII grid, DTED, and GRASS grid formats. Flow directions and flow accumulations for DEM points are computed using TOPAZ (Compute TOPAZ Flow Data command in the Drainage menu). This program uses an eight-point pour technique to determine the direction of flow. This technique specifies that the flow will be directed toward the neighboring (in a structured grid there are eight neighbors for each point) DEM point with the lowest elevation. The algorithms typically include functionality for eliminating pits and resolving ambiguities when the lowest elevation is shared by more than one neighboring point.

The typical steps for using DEMs to develop hydrologic models are:

As mentioned above, USGS DEMs can be downloaded from the Internet or obtained from government agencies, universities, or private vendors. The File | Open command can be used to import the DEM from one of the supported formats. The figure below shows a contoured DEM after it has been imported. 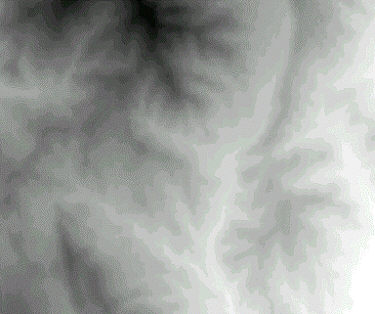 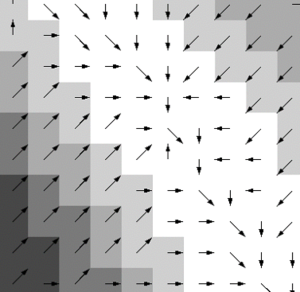 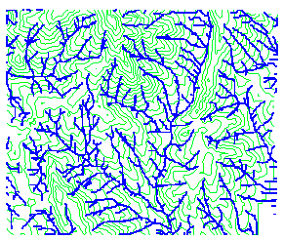 3. Identify the Watershed Outlet and Convert DEM Streams to Arcs

With the aid of the flow accumulations, the location of the watershed outlet needs to be determined and an outlet feature point created there. A minimum threshold is then defined and all of the DEM points “upstream” from the defined outlet(s) are connected together to form a stream network of feature arcs. 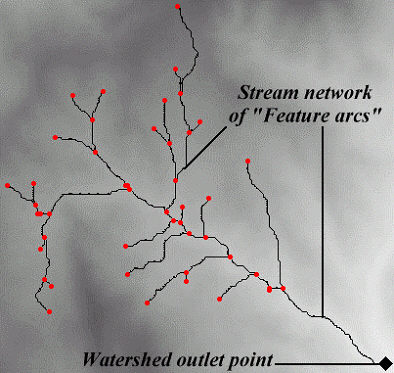 If wanting to further subdivide the watershed into sub-basins then nodes along the stream feature arcs should be converted to "outlet" nodes by using the feature point/node attributes dialog. As these nodes are converted the hydrologic modeling tree is automatically updated. 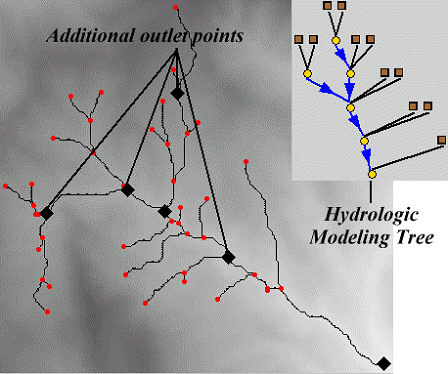 Using the outlets on the stream network and the flow directions, the contributing DEM points for each outlet are assigned the proper basin ID. 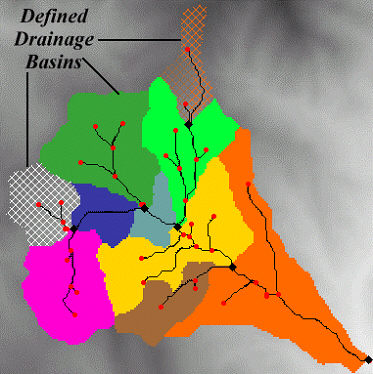 Similar to how flow accumulations were converted to stream arcs, the boundaries between DEM points with different basin IDs can be converted to feature polygons. Storing a basin as a single polygon rather than several hundred (or thousands) of DEM cells is much more efficient. 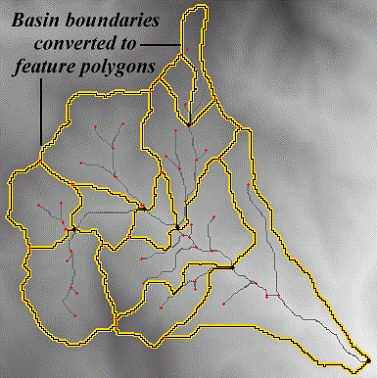 Once the boundaries of the sub-basins have been determined geometric properties important to hydrologic modeling (area, slopes, runoff distances, etc.) can be computed from the DEM data. 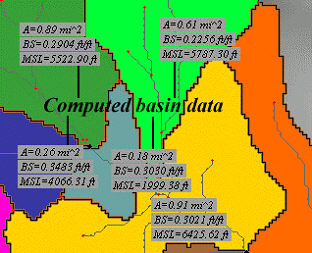 At this point, there should exist the same model as described in the previous section, where watersheds are defined strictly from the feature points, lines (arcs), and polygons. The computed data from step nine is automatically stored in the appropriate locations for hydrologic model definition, and the remaining parameters for the desired hydrologic model can be entered using the appropriate interface dialogs.