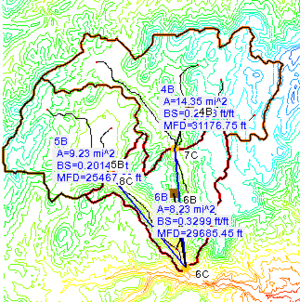 Watershed delineation with DEMs is one of the most common and simplest methods available for automatically characterizing a watershed. Many raster GIS programs have similar capabilities, but WMS has been designed specifically with the purpose of hydrologic and hydraulic modeling in mind.

One program that has been developed for delineation on a DEM is the TOPAZ program. A special version of TOPAZ has been created for use with WMS that only requires an elevation grid as input and produces a flow direction grid and a flow accumulation grid as outputs.

The general process of delineating a DEM is as follows:

More details about this process are given in the DEM Guidelines article.

After defining basins with a DEM the results are converted to a drainage coverage for easier data storage and manipulation. It is also possible to modify an existing delineation using feature objects.

This article is a [stub]. You can help xmswiki by expanding it.
Retrieved from "https://www.xmswiki.com/index.php?title=WMS:Delineation_with_DEMs&oldid=143955"
Categories: