The Rational Method equation is designed to compute peak flows. However, a hydrograph, based on the peak flow and basin (or outlet) time of concentration, can be computed using one of five different unit hydrographs. Furthermore, there are two different methods (traditional and route by summing) hydrographs can be computed at confluence points.

The Rational Unit Hydrograph has a time to peak equal to the time of concentration. Both the rising and receding limbs of the hydrograph have a duration equal to the time of concentration, and therefore the shape of the hydrograph is an isosceles triangle with a time base of 2tc as shown below. This method is chosen by specifying the Modified Hydrograph Method using 1.0 for the recession limb coefficient and tc for the storm duration. 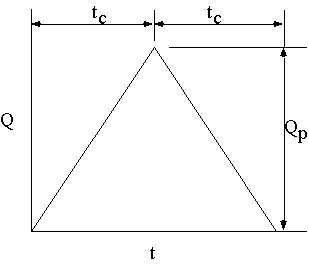 The Modified Rational Hydrograph also assumes that the time to peak is equal to the tc, but allows for the duration of the storm to be longer than tc, resulting in a trapezoidal shaped hydrograph as shown below. A coefficient to modify the slope of the receding limb may also be applied with this method. 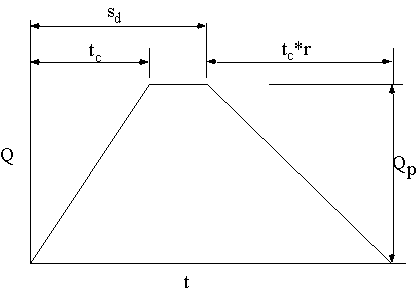 The Dekalb Rational Hydrograph was developed by Dekalb County Georgia, and like the Universal Rational Hydrograph, ordinates are computed by scaling the peak discharge by an appropriate value. The time to peak occurs at 5 * tc, while the time base is 10 * tc. All coefficients occur at increments of tc, and are different depending on whether tc is less than 20 minutes or not. The following table lists the coefficients and a typical hydrograph is shown below. 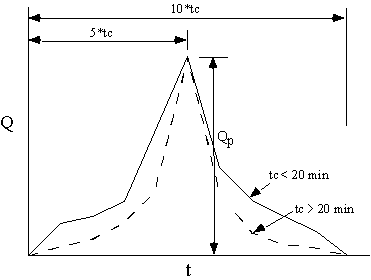 The Universal Rational Hydrograph uses a set of coefficients and the peak discharge to compute the hydrograph ordinates at different times. The coefficients are shown in the following table and the resulting hydrograph is displayed.

Notice that the peak occurs at 3*tc, and the time base is equal to 11*tc. 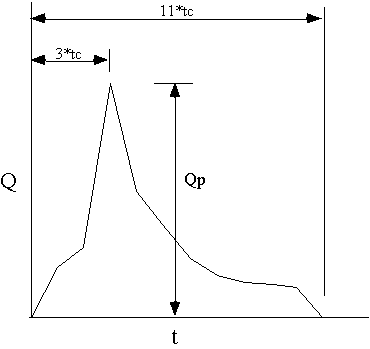 With the User Defined method of hydrograph generation, specify the number of ordinates for a dimensionless unit hydrograph and then define the t/tc and Q/Qp values.

NOTE: All t/tc values must be even integers.

User defined files may be exported or imported so that they do not need to be re-entered from one run of WMS to the next. 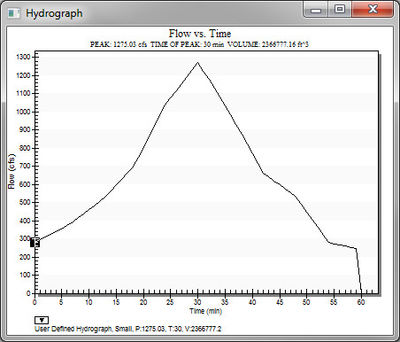 Example of a user defined hydrograph