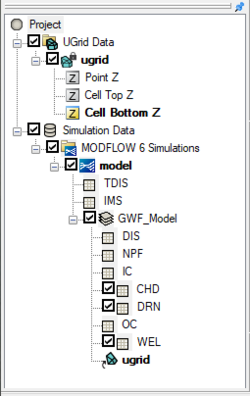 Example of a MODFLOW 6 simulation in the Project Explorer

To create a MODFLOW simulation:

Double-clicking on any of the packages listed in the Project Explorer will bring up the package dialog for that package.

This dialog appears when a new MODFLOW 6 simulation is first created. The dialog has the following options: 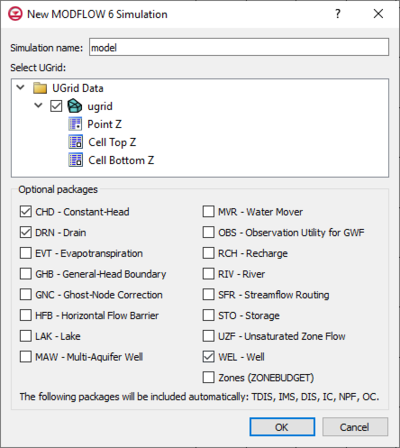 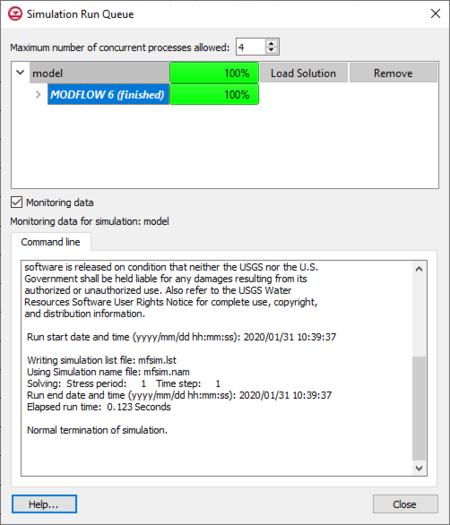 Example of the Simulation Run Queue

Towards the bottom of the dialog, the following is displayed: 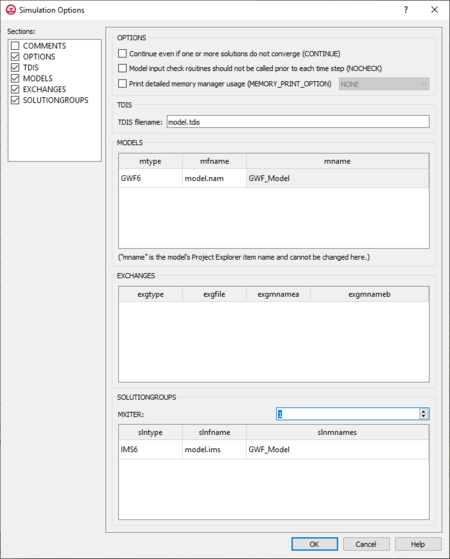 Example of the Simulation Options dialog for MODFLOW 6

Starting in GMS 10.4, GMS can export MODFLOW files for use with MODFLOW 6. This version of MODFLOW contains a new object-oriented program and underlying framework for supporting multiple types of models within the same simulation.

The process for doing this is similar to that of saving native text files. In the MODFLOW Global/Basic Package dialog, there is an option to Save MODFLOW 6 copy. When this option is selected, MODFLOW 6 files will be generated when running MODFLOW from GMS.

In GMS, some features of MODFLOW 6 are not yet supported or only have minimal support. These include:

The MODFLOW 6 export option does not function with projects that are incompatible with MODFLOW 6. Projects with unsupported features or parameters will not be successfully exported.

Not all MODFLOW packages are supported in MODFLOW 6. The following table shows the correlation between MODFLOW 6 packages and packages from previous versions of MODFLOW.

The files generated for MODFLOW 6 will appear similar to those created for other versions of MODFLOW. The *.mfn.log file will contain notes about the export and mention any items that could not be exported for MODFLOW 6.

For more details, see the MODFLOW 6 Input and Output document