A TIN can be constructed by triangulating a set of vertices. WMS connects the vertices with a series of edges to form a network of triangles. The resulting triangulation satisfies the Delaunay criterion The Delaunay criterion ensures that no vertex lies within the interior of any of the circumcircles of the triangles in the network (figure shown below).

As the triangulation process proceeds, adjacent triangles are compared to see if they satisfy the Delaunay criterion. If necessary, the adjacent edge of the two triangles is swapped (the diagonal of the quadrilateral defined by the two triangles is changed to the other two vertices) in order to satisfy the Delaunay criterion. This edge swapping process forms the basis of the triangulation algorithm. 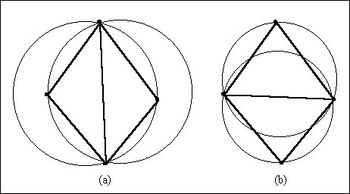 It is important to note that the triangulation described above is used as a preliminary step to creating a TIN conditioned for basin delineation and is not sufficient in most cases for actually doing the drainage delineation. Even if beginning with TIN data, create another TIN using feature objects.

Vertices can be triangulated using the currently selected triangulation algorithm by selecting the Triangles | Triangulate command from the TIN menu. It is important to recognize that the Delaunay triangulation is not necessarily the best for performing drainage delineation because it does not ensure that important linear features such as streams and ridges will be honored in the TIN as triangle edges. For this reason, always use a TIN triangulated in this fashion as a "background" elevation source for creating a new TIN from a "conceptual" model of feature objects.

The Triangles | Optimize Triangulation command of the TIN menu will optimize triangulation according to the following criterion:

The criteria is specified in the TIN Options dialog.

The Triangles | Remove Flat Triangles command attempts to eliminate flat triangles on a TIN. A first pass is made in an attempt to adjust the triangulation or slightly alter vertex elevation and a second pass is then made which inserts new vertices in flat triangles and interpolates the elevation.

This method inserts new points in flat triangles and adjusts the elevation of the new points by using an interpolation technique. This method works well when there is a small number of clustered (2-10) flat triangles. However, when large regions of flat triangles exist, the TIN filtering should be used before trying to remove flat objects.

When the Triangles | Remove Flat Triangles command in the TIN menu is issued, WMS computes the differences between the elevations of the flat triangles and the elevations of the surface defined by the IDW quadratic interpolation scheme. This technique is used because of its ability to accurately infer important terrain features such as pits, peaks, streams, and ridges. The difference between the flat surface and the interpolated surface is referred to as the "deviation" of the flat triangles. The deviation is computed at regularly spaced points on the interior of each flat triangle. The subdivision factor in the Interpolation Scheme dialog controls the level of subdivision or the number of interior points. The point in each flat triangle with the maximum deviation is assumed to represent the maximum for that triangle.

Once all flat triangles have been eliminated, further processing to remove flat edges and pits is done. Prior to performing the Triangles | Remove Flat Triangles command all TIN vertices are locked. Any new vertices created as part of this process are set to unlocked status. When completed, it is possible to distinguish the new vertices from the original by observing the ones that are unlocked. It may be desirable to unlock all vertices for further editing.

The thin triangles can be selected and deleted using the normal selection procedures. There is also an option for selecting thin triangles when the Select Triangles tool is selected. If the CTRL key is held down, it is possible to drag out a line with the mouse. All triangles intersecting the line will be selected.

The critical length ratio for selecting thin triangles can be set by selecting Length Ratio from the TIN menu. The length ratio is defined as the longest side of the triangle divided by the sum of the two shorter sides.

A maximum edge length may also be specified in the TIN Options dialog.

TINs are generated in WMS using the Delaunay criteria. This method creates a set of triangles that are as equiangular as possible, and while this generally creates a good terrain surface, it does not ensure that all-important hydrologic features such as streams and ridges will be honored with triangle edges. A classic problem that occurs and inhibits drainage analysis is the "false dam". A false dam occurs during the triangulation process when an edge straddles a natural channel, forming a dam at the bottom of the channel as shown in Figure a. False dams are easily corrected by swapping the triangle edge ab to cd as illustrated in Figure b. Triangle edges are swapped using the Swap Edge tool and clicking on the edge which needs to be swapped. 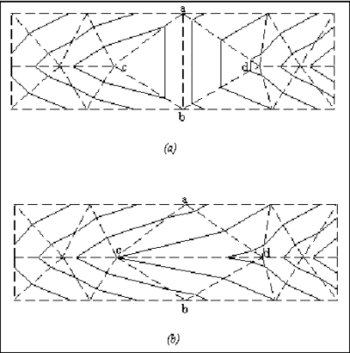