As described above, MODFLOW models can be defined using one of two approaches: (1) by editing the input values on a cell-by-cell basis directly on the grid, or (2) by creating a high level conceptual model using the Map module. Both approaches can be used to define the layer elevation arrays. With the grid approach, a constant value can be assigned to the entire array at once or to a set of selected cells. With the conceptual model approach, a set of polygons can be used to define zones of elevations within each layer. While these two approaches are simple to use, in most cases they result in an overly simplistic stair step definition of the layer elevations. In most cases, it is more appropriate to use the 2D geostatistical tools in GMS to smoothly interpolate layer elevations.

The following steps are used to interpolate elevation data:

Step 2: Interpolating the Elevations to the MODFLOW Arrays

Once the scatter point file is imported to GMS, the next step in defining MODFLOW layer elevation arrays is to interpolate the elevations to the MODFLOW layer elevation arrays. The elevation values can be interpolated directly to the MODFLOW arrays using the ...to MODFLOW Layers command in the Interpolation menu in the 2D Scatter Point module. When this command is selected, the Interpolate to MODFLOW Layers dialog appears.

The purpose of this dialog is to associate each of the datasets in the scatter point set with one of the layer data input arrays. A dataset and the corresponding layer data array are selected in the top of the dialog and the Map button is selected. The defined relationship is then shown in the bottom of the dialog. Once this is completed for each dataset/layer data array combination, the OK button is selected and the scatter point data set values are interpolated directly to the MODFLOW arrays using the currently selected interpolation options.

In some cases, GMS can automatically match the scatter point datasets to the appropriate layer elevation arrays. GMS searches each dataset name to see if "top" or "bot" makes up any portion of the name. If so, it then searches for a number to determine the layer the array should be interpolated to. For example, the dataset names top1, top of layer 1, and top elevation of layer 1 would all automatically map correctly. 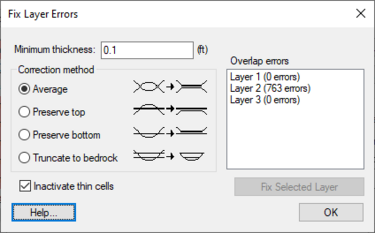 When interpolating layer data for the purpose of defining MODFLOW layer elevation arrays, there are often cases where the interpolated values overlap. For example, for some of the cells, the top elevation values for a particular layer may be lower than the bottom values for the layer. In some cases, the best way to fix such a problem is to experiment with the interpolation options or to create some "pseudo-points" to fill in the gaps between sparse scatter points. In other cases, the overlap may correspond to a pinchout or truncation in the layer. In such cases, the elevations need to be adjusted so that there is a small but finite thickness for all cells in the overlapping region.

The first step in fixing layer errors is to use the Model Checker to determine if elevation overlaps occur. If they do occur, the Fix Layer Errors button at the top of the Model Checker dialog can be used to bring up the Fix Layer Errors dialog. The number of overlap errors for each layer is listed on the right side of the dialog. A layer is highlighted and a correction method is selected on the left side of the dialog. The Fix Selected Layer button is then used to adjust the elevations. Four options are available for fixing layer errors:

With the Average method, for each cell where an overlap is found, the average elevation at the overlap is computed as

The top and bottom elevations are then adjusted as follows:

This option is useful for modeling the transition zones adjacent to embedded seams.

With the Preserve top method, at each cell, where an overlap is found the top elevation is unchanged and the bottom elevation is adjusted to:

This option can be used to model truncated outcroppings.

With the Preserve bottom method, at each cell where an overlap is found the bottom elevation is unchanged and the top elevation is adjusted to:

Solids can also be used to define layer data for MODFLOW. The Solids → MODFLOW and Solids → HUF commands in the Solids module set up the layer elevations using the currently defined solids.