For example, the user might be looking at a specific contaminant and want to know what the probability is that the concentration of this contaminant will be above the EPA level for drinking water. The user would generate a rule reflecting this limit. After processing all rules for each simulation, GMS creates a probabilistic threshold dataset.

The Risk Analysis Wizard is entered through the right-click menu for a folder in the Project Explorer and choose Risk Analysis... .

The first step in the Risk Analysis Wizard is to choose what type of simulations to process. 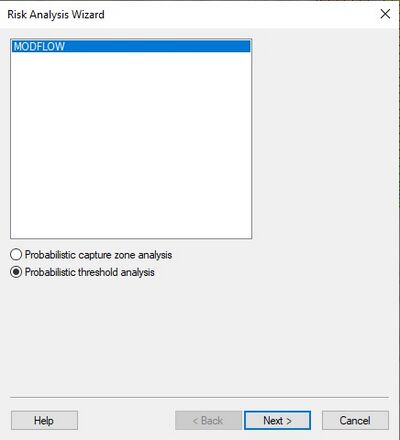 Capture Zone Analysis can only be performed on MODFLOW solutions 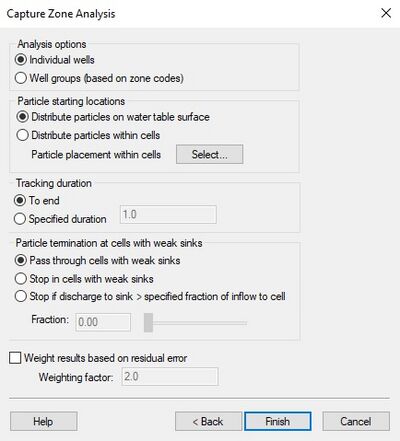 Choose this option to create a probabilistic capture zone for each uniquely named well in the MODFLOW model.

Choose this option to create a probabilistic capture zone for each different zone code number.

This option sets MODPATH to move particles through the flow field until they exit the model.

This option sets MODPATH to move particles through the flow field until they either exit the model or the time reaches the duration set, which ever comes first.

Weight Results Based On Residual Error

In all of the capture zone methods, the algorithms used to synthesize the probability data set can be weighted using observation data. This makes it possible to give more weight to model instances with smaller calibration error when calculating the capture zone probabilities. The weighted head and flow observations can be compared to the computed values to come up with a global error norm, E, for each model run. This error norm can be based on the root mean squared (RMS) error, the sum of the squared weighted residuals, or any other measure selected by the modeler. For capture zone analysis, GMS uses the sum of squared weighted residuals (SSWR) for the error norm. The error norm from each MODFLOW run is used to compute a weight for the given solution using the following equation:

so that the weights sum to unity. Equation 1 was developed to give the greater emphasis to the lower error values and to allow controlling the relative emphasis given to low vs. high values simply by adjusting the α value. The equation also avoids problems when one of the error values is zero, since a zero error value does not result in an infinite weight. The equation is also designed to allow scaling the weights according to the data being examined. This is done by subtracting the individual SSWR from the mean error and dividing by the standard deviation.

Equation 1 centers the weights on the mean error. The relative weight given to values differing from the mean is biased by the factor. This makes it possible to bias the resulting weight using knowledge of the site and the quality of the observation data.

The figure below shows how the α factor in Equation 1 affects the weight applied to a given error. An α factor of 1.2 makes the contribution of each SSWR almost linear, whereas an α factor of ten gives most of the weight to the lowest 5–10 percent while discounting the other error values. Typically use an α value of 2.0. 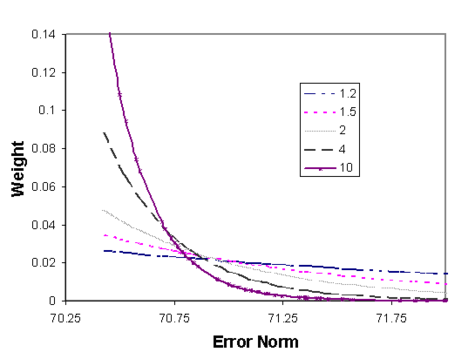 Threshold analysis can be performed on any collection of 3D datasets. The threshold analysis dataset is created by using rules. For each rule, select a dataset (only applies to solutions with multiple data sets.), the greater or less than sign and a value. There is no limit to the number of rulse that can be created. The AND and OR logic options allow the user to use: 1st rule AND 2nd rule AND 3rd rule; or 1st rule OR 2nd rule OR 3rd rule. Threshold analysis creates one 3D dataset. 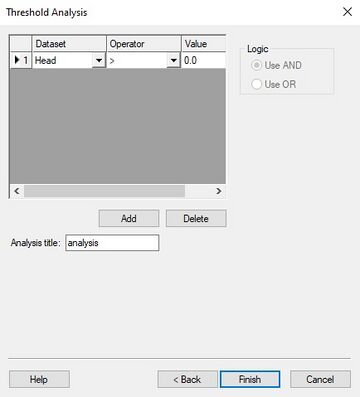