By attenuating and storing the incoming flow, lakes and wetlands prove to be important hydrologic features of a basin and dramatically alter the response of a watershed to a precipitation event. Both in-stream and out-of-stream lakes and wetland areas can be simulated in this way. Lake and wetland polygons are conceptually modeled in WMS in the GSSHA coverage.

After assigning a detention basin as a node attribute in a GSSHA coverage, the following should be done:

Lateral seepage flow conceptually is the flow through the subsurface peat layer. It is calculated as a darcian flow across the entire cell face. The flow through the vegetation is computed as a mixed mode flow, darcian and manning's. The flow is computed for both darcian and manning's flow and the actual flow rate varies between the two depending on the water height in relation to the plant height.

The wetland areas are treated as simple flow storage areas with special sediment conditions. The wetland sediments are treated as a lens that must be saturated before it will release water into the groundwater domain. Thus, five parameters must be specified for the wetlands area: maximum storage depth, retention depth (sediment lens thickness), base elevation, hydraulic conductivity of the sediment lens, and hydraulic conductivity of the soil just below the sediment lens (retention depth).

Wetlands can be created as feature polygons in a GSSHA coverage and define the cells that form part of a wetland. Wetland areas store small amounts of water and act as important aquifer recharge areas. The areal parameters are assumed to be homogeneous over the polygon. The wetlands areas will act as small lakes with slightly different infiltration parameters.

A different hydraulic conductivity value can be specified for the sediments responsible for the wetland condition if a high water table is not the principle cause of the wetlands. The wetlands and lakes do not have any special sediment trapping or contaminant removal parameters. They are simple treated as modifying the stream and overland flow processes. Lakes and wetlands may be in-stream or out-of-stream features. 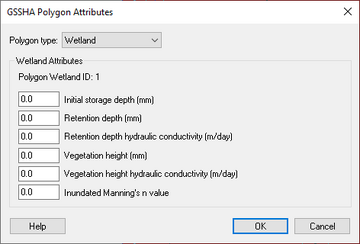 The GSSHA Polygon Attributes dialog has four different Polygon type options that can be selected from the drop-down menu. Only the "Wetland" option has user-changeable attributes.